Omodos is a beautiful village situated approximately 40 kms north-west of Limassol, in the foothills of Mount Olympus, many tourists visit year round to see its charming winding streets, traditional taverna’s and beautiful Byzantine architecture alone; however there are also a number of monuments and wine tours that are also worth a visit.

Many vines and various fruit-trees (apple, plum, pear, peach, and apricot trees) are cultivated in the region. There also are uncultivated areas that are taken over by varied natural vegetation. A small part of the northern side of the village has been taken up by the state forest of Paphos.

Historians think that the village of Omodos was created towards the end of the Byzantine period or the early ruling of the Franks, after the communities of upper and lower Koupetra at the time. According to ancient tradition, Isaac Komninos who was a despot of Cyprus arrived in Koupetra after his defeat at Kolossi from Richard the Lionheart, the late King of England who later called on him for peace talks.  After the community of Koupetra was detroyed, a new community was built around the original Monastery of the Holy Cross.

One of the best things to see in Omodos is the Monastery of the Holy Cross, built in the centre of the village, a number of cafes and restaurants line the entrance of the square, with its imposing presence it becomes a significant part of the island’s cultural heritage. The Monastery of the Holy Cross is one of the oldest and most historic monasteries in Cyprus, and definitely worth a visit. 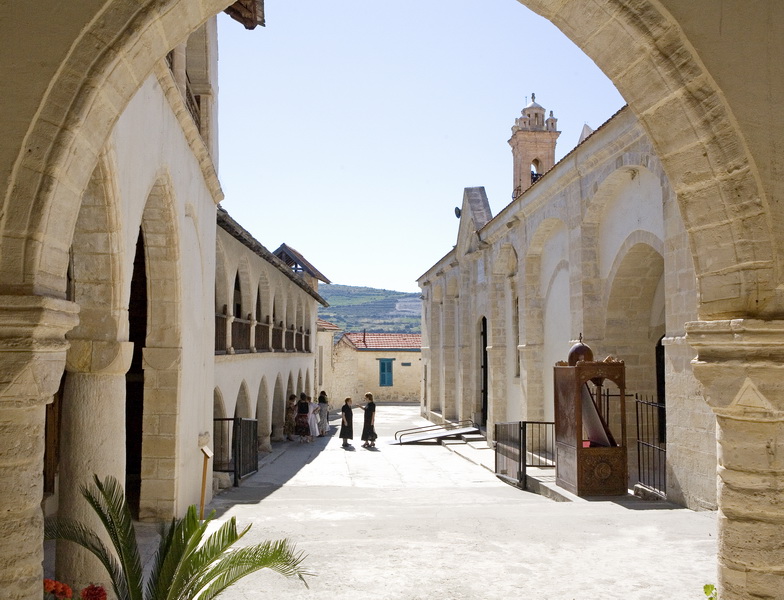 Tip: Stop for one of the best Cyprus Mezes on the island in Katoi Restaurant that has live traditional Greek music all Sunday.

Omodos is located in the Limassol District of Cyprus and is 80 kms outside of Nicosia.  It is built near the west bank of the Ha Potami River, at an approximate altitude of 810 metres. Following the signs to Troodos from all major cities will allow you to reach the village within about 40 minutes.