The Holy Monastery of the Panagia tou Kykkou (or Kykkos Monestary) is one of the wealthiest and renowned monasteries in Cyprus due to its elaborate building and beautifully opulent interior. Originally built to be dedicated to Panagia (the Virgin Mary); the monastery possesses one of three icons attributed to Agios Loukas (Apostle Luke) the Evangelist.

Kykkos Monastery was founded around the end of the 11th century by the Byzantine emperor Alexios I Komnenos during the years 1081–1118. Archbishop Makarios III was the first recorded President of Cyprus and started his religious career there as a monk in 1926. He remained fond of the place and returned there many times during his lifetime. His request to be buried there materialised after his death in 1977 and remains a popular spot for locals and tourists alike to visit. 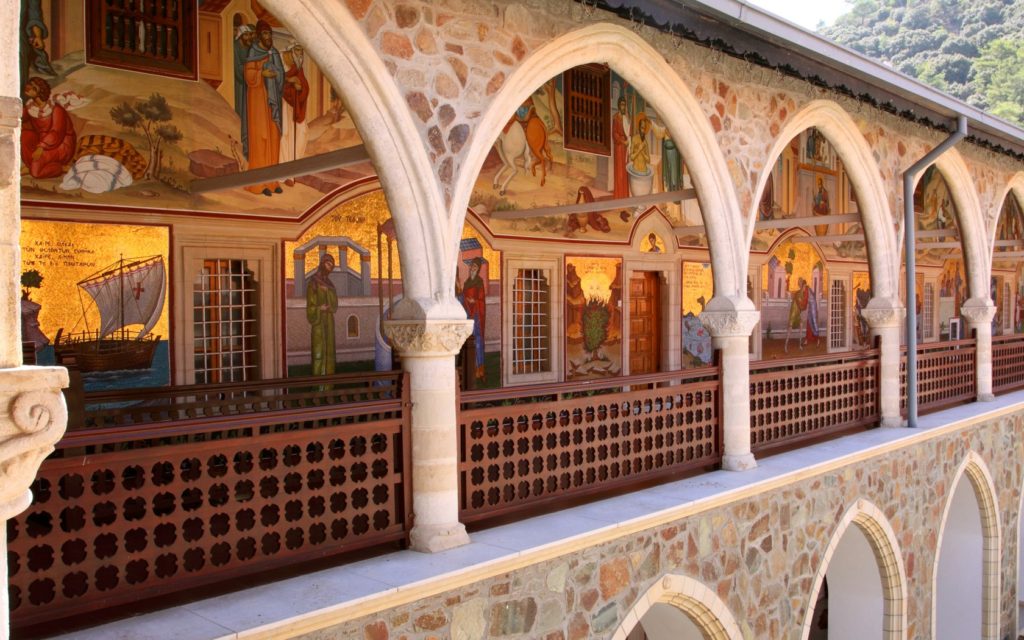 Lying 3 km west of Kykkos monastery; with its mixture of religious observance and commercial enterprise, the presence of President Makarios’s tomb and the nearby EOKA hideouts, is a must-visit for anybody interested in learning more on modern-day Cyprus.

There are no remains of the original monastery as it was accidently burned down many times by forest fires that swept through the region due to the summer heatwaves. The modern building represents a more modern-day Cyprus more typical of recent architectural designs.

The monastery lies at an altitude of over 1300 metres on the North West face of the Troodos Mountain range in a small village called Pedoulas village. From all the main cities in Cyprus travelling by car, following signs to Troodos will point you in the right direction. Once you have climbed significantly, the Monastery is extremely well sign posted.