Protaras is a resort town located on the southeastern area of Cyprus and boasts some of the best beaches the Greek side of the island has to offer. One of these beaches and arguably one of the best is the Fig Tree Beach, with its crystal clear waters and golden sandy beaches, hosting an array of water-sports during the summer months, making it a must visit destination for watersport and beach enthusiasts whilst visiting the island.

The beach is one of Cyprus’ numerous Blue Flag Beaches for homing some of the best underwater sceneries and clean waters. The Blue Flag is a certification by the Foundation for Environmental Education stating that a beach meets its consistent and high standards.

The water is generally shallow and waves are small and calm allowing for the best water-sports to be learnt and practiced effortlessly. From water-skiing to wind surfing, you can enjoy a relaxed or thrill seeking day by this beach, all with the safety of knowing that trained lifeguards and lifesaving gear is available seasonally and during typical beach-going hours.

Protaras used to be called Leukolla in ancient times, and historically renowned for having a safe harbour, it was often sought for refuge during sea battles. It was also known as “The Land of Windmills” due to having many of them as an area that produced the majority of locally manufactured flour and grains that were distributed to all areas of the island.

Protaras was a small town that grew into a whole resort due to the beautiful shorelines, stretching all the way from Pernera town along the coast to Cape Greko almost reaching the Ayia Napa province inland.

A point of interest for swimmers and divers is a small island which can only be reached by swimming through the shallow waters. Take a snorkel to see some amazing sea life and aquatic plants just beneath the waters surface.

Tip: During peak summer months, make sure you arrive early (before midday) as the car park tends to fill up in the early afternoon making it harder to find a spot close to the shore (it’s Cyprus after all) and of course sunbeds in a prime spot!

Fig Tree Bay Beach was awarded the third best European beach by a TripAdvisor article in 2011 due to the water clarity, picturesque settings and sand quality. It has recently dropped from the top spot due to its increasing popularity and therefore less sunbed availability during peak summer months and less tranquility.

The Fig Tree Bay’s name comes from a solitary fig tree that has remained planted on the beach since the 17th Century. 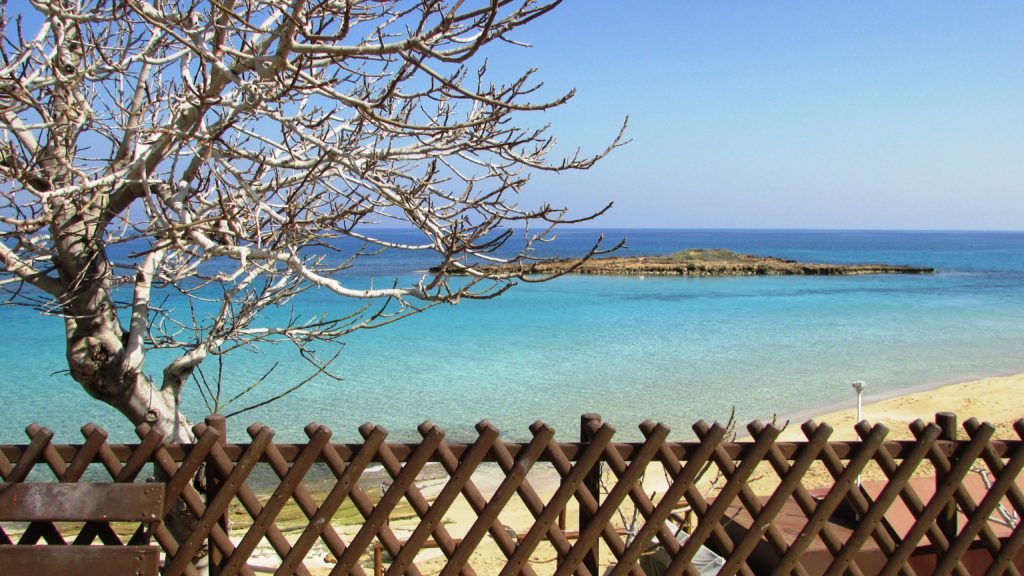 Two ways to get there by car: the easiest route is following the road to Paralimni, heading to Famagusta along the coast in the Cape Greko direction or through Ayia Napa, followed by a more scenic coastal road past Cape Greko.

There are frequent buses that run from Ayia Napa and Famagusta. Routes 101 and 102 both stop at Fig Tree Bay Beach.